Mr Pickles’s success rates for the female reversal of sterilisation operation in women aged 41 and under are as follows:   Success of the female sterilisation reversal operation is defined in 2 ways. The first is by pregnancy of which Mr Pickles has a 75% success rate meaning that 75% of the women who had this operation performed by Mr Pickles had a pregnancy (this percentage excludes those women over the age of 41, who were reversed for PTLS or any other reason than trying to get pregnant). 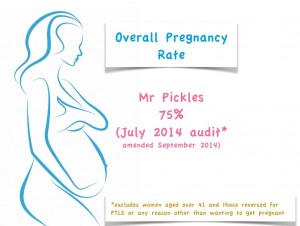 The second factor by which success is determined after a female sterilisation reversal is Patency. This means if the fallopian tubes are able to allow an egg to pass along to enable fertilisation.

These figures relate to all women who attended Mr Pickles clinic at the BMI Park Hospital, Nottingham up to the end of 2012. They show his female reversal of sterilisation success rates in detail. For the purposes of the audit, the figures relate to those women aged 41 and under. In total, up to the end of 2012, 95 women attended for a reversal of their sterilisation. Of these, 77 were 41 years old and younger and trying for a baby.

Nobody suffered from a DVT (deep vein thrombosis) Nobody had serious bleeding as a consequence of surgery.

How Do These Female Reversal of Sterilisation Success Rates Compare?

In the USA, Chapel Hill Hospital has considerable experience and performs higher numbers of sterilization reversals. On their website, they have the following figures:

Mr Pickles’s female reversal of sterilisation success rates, measured in terms of pregnancy and fallopian tube patency rates, compared to a female sterilization reversal practice in the USA indicate that he has an acceptable success rate with a high percentage of women becoming pregnant after surgery.

43 year old lady originally consulted with Mr Clive Pickles in September 2012. Had been sterilised with clips in 2006. Had had 3 children in the past, 2 delivered by Caesarean section. Had a new partner and wished to have a child together. Underwent a reversal of sterilisation in December 2012. Unfortunately not pregnant by

This website uses cookies to improve your experience while you navigate through the website. Out of these, the cookies that are categorized as necessary are stored on your browser as they are essential for the working of basic functionalities of the website. We also use third-party cookies that help us analyze and understand how you use this website. These cookies will be stored in your browser only with your consent. You also have the option to opt-out of these cookies. But opting out of some of these cookies may affect your browsing experience.
Necessary Always Enabled

Any cookies that may not be particularly necessary for the website to function and is used specifically to collect user personal data via analytics, ads, other embedded contents are termed as non-necessary cookies. It is mandatory to procure user consent prior to running these cookies on your website.